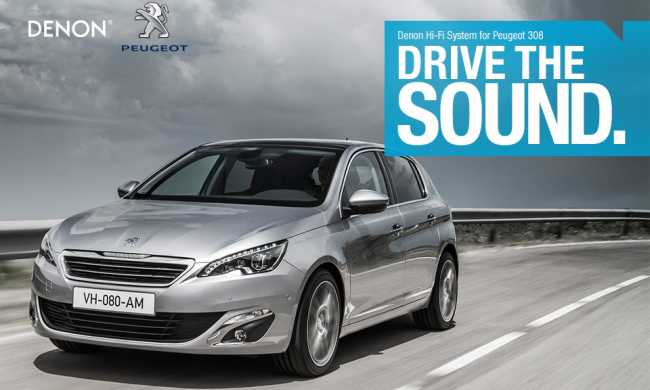 For most of today’s motorists an essential component of an enjoyable drive is great music. When purchasing a new vehicle, there are probably only a few who are able to claim that their choice was not influenced to some extent by the quality of its sound system. There have always been companies that are seen as industry leaders both within the automotive industry and among the manufacturers of Hi-Fi systems and, when a leader from each of these fields agrees to merge their products, then the result can only be spectacular.

Such a fusion of technologies was announced in October 2013 when the widely-respected French car manufacturer Peugeot entered into a contract with the internationally-acclaimed wizards of sound – Denon. When choosing to drive the stylish new 308, purchasers may now add to their pleasure with the option of a state-of-the-art, in-car sound system that was specially developed by the electronics manufacturer in close cooperation with the automotive company.

In practice 25 dedicated engineers from Denon engaged with representatives of Peugeot in order to complete the project which involved around one hundred technical meetings between the two industry giants and a total of over 34,000 hours of development time. The goal throughout the project was to re-create, within the confines of a vehicle, all of the superlative sound experience that is available to today’s listeners in their own homes. The first step was to abandon the bulky, power-hungry components of conventional systems and to develop lighter and more efficient alternatives.

The result is a compact but high-performing assembly that looks every bit as impressive as it sounds. The 4 soft-domed, 25mm tweeters have each been provided with resonance chambers to minimise any distortion and are located in the front of the vehicle along with 4 CosCone™ woofers fitted, seamlessly into its doors, while a single subwoofer with an integrated 100W class-D, 8-channel amplifier is neatly concealed in the boot. Sound distribution may be switched between two modes. One has been designed to meet the needs of a lone driver while the alternative caters for the pleasure of a full complement of passengers.

The new high performing in-car system from Denon compliments perfectly the luxurious appointments and classic flowing lines of the new generation Peugeot 308 and adds even further to the exceptional driving pleasure offered by the this well-equipped offering from the French company. Long a staunch favourite of South Africa’s drivers, in creating its latest 308, the company has combined exterior elegance with interior comfort and, in addition, it has leveraged the very latest developments in electronics to ensure a safe and efficient driving experience.

While enjoying each note of a rock classic in stunning, crystal clear detail, the owner of this advanced piece of automotive wizardry will also experience the benefits offered by driver aids such as its collision warning system, parking sensors, blind-spot monitoring and intelligent cruise control. It is, however, not only the vehicle manufacture that has introduced the element of intelligence. The sound system too is capable of some slick decision making when necessary. Equipped with sensitive feedback systems the Denon in-car system is able to respond appropriately to road noise and distortion as well as to changes in the speed of the racy Peugeot 308, adjusting equalisation and volume as needed to sustain peak performance. The bottom line is that this is a car to delight everyone who seeks to combine style with comfort and performance and who also wants the best in all round safety.

Though Denon was established a hundred years later than the car manufacturer, its innovative products have seen it grow to the status of a market leader in recent years. Once involved both in the manufacture of sound systems and the record industry, since 2001 it was detached from the Columbia label to stand alone as an audio specialist.